I heard a great story the other day about Bob Dylan in London's glittering Crouch End, which I'm aware now - as the result of a friend from Crouch End groaning and saying "Not that old chestnut again" - has been doing the rounds.

The tale, as told to me by a genuine pillar of the local community, runs thus. About 20 years ago Bob Dylan was mates with Dave Stewart of Eurythmics, who owned and ran a recording studio in Crouch End called The Crypt. It has since been sold to David Gray, who in his rather dull way has been trying to have it converted into flats.

Be that as it may, Dylan apparently tried to get to the studio from an airport once by taxi. But instead of being taken to 145 Crouch Hill, which is the location of this rather wonderful building containing the studio, 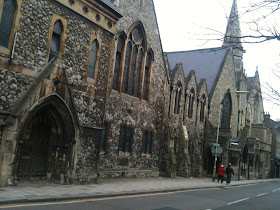 he was dropped off at 145 Crouch End Hill, 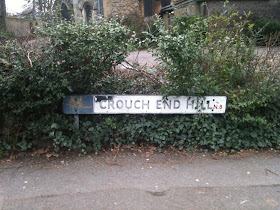 which makes a fork in the road with Crouch Hill about 50 yards away. Dylan - I was told by my pillar-ish friend - rang on the door, which was answered by the lady of the house, whereupon he asked whether Dave was in. As it happened, the lady's husband was called Dave but had popped out to the shops, so she invited Dylan in and gave him a cup of tea. When her husband returned she greeted him at the door with the words "Bob Dylan's here to see you."

It's just about teetering on the edge of plausiblity, isn't it? Isn't it?

Someone friendly sounding called Anthony Lerner answered the telephone when I rang the Crypt. "Aha!" he said, when I mentioned Dylan. "I think I know what story this is going to be."

He was right. "I heard it from the man who was Dave Stewart's chief sound engineer at that time," he said, promisingly.

There was nothing for it, I reasoned, but to go down there and knock on the door of 145 Crouch End Hill to ask the people who lived there whether it was true. Surely, even if the original occupants had moved, they would have mentioned it to the present owners while they were trying to sell them the place? That would nail it. After all, the story has many of the qualities of an urban myth while also being possibly the only one I've ever heard with the potential to be properly checked out. None of your crocodiles-in-the-sewers type will-o-the-wisps here.

Also, frankly, I thought it would be fun.

So on a chilly afternoon about a week ago I found myself trudging up and down Crouch End Hill, which is in an area where they sell things like this, 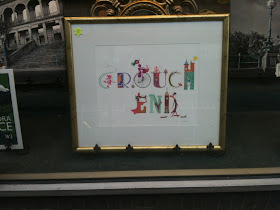 presumably because the locals like to buy them (don't get that kind of tat in Bethnal Green). Imagine my disappointment - and cold extremities - then, when I discovered that while Crouch End Hill has two schools, a church and several shops, there are very few residential properties and definitely not a number 145.

This made me sad.

So sad that I had to retreat sadly to Banners restaurant nearby, of which I had heard good things, for a beer. It has this mural on the outside. 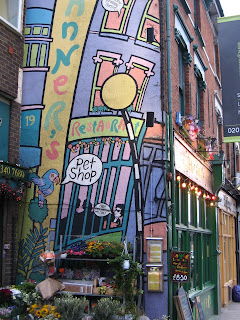 If you look closely you can see that the little figure in the window is a representation of Bob Dylan and there is a bubble coming out of his mouth containing the words "Don't you know who I am?" (Now say that out loud in a Bob Dylan voice: "Don't you knoooow who I aaaaam?")

"Oh yes," said one of several waitresses within. "That's because back in 1993 Bob Dylan was here one evening and he wanted booze. But we're only allowed to serve alcohol with food, because of our licence. He didn't want any food, though, and he said 'Don't you know who I am?'"

Which is always worth a go, I guess, even if you're not Bob Dylan.

"He was sitting at this table," she explained, leading me toward the back of the restaurant, which was about half full of customers chatting to each other, to show me this. 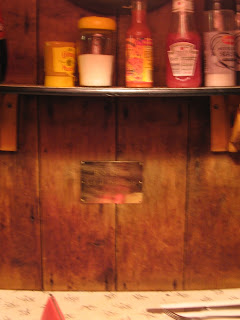 Which is a plaque on the wall that is slightly easier to read in this. 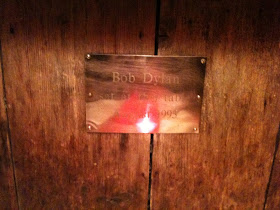 Although for the avoidance of doubt the inscription reads "Bob Dylan sat at this table, August 1993". This was, I was informed, during the same visit when the incident with the taxi and the wrong Dave took place.

While I was having my beer there was a gentle discussion for my benefit between two other waitresses who were on their breaks, about the nature of urban myths in the area. "For instance," I was told, "we're always overhearing people saying things about this place that just aren't right... The other day I heard someone say that it was owned by Nik Kershaw, when they were just confused because the owner - Juliette Banner - used to go out with Andy Kershaw."

Which is worth knowing, I suppose.

Anyway. I can recommend their Nordic beer which is strong and served extremely cold. But not so much their quesadilla, which was much more like a big old pancake than I was expecting.

I also set to thinking how weird it must be to be Bob Dylan. I mean, I have difficulty sometimes with the idea that I did some of the things I did 20 years ago. Imagine what it must be like having people making stuff up, mythologising the things you did - or didn't do - simply because they enjoy the idea of you - as if life weren't confusing enough already.

And because I believe in doing this stuff in a certain way, I also put in a call to Dylan's publicist, a man called Tom Cording at Sony music, though for all the response I got, Cording himself could be a mythological figure.

However, I haven't given up hope and am thinking that if I send him a link to this blog he - or someone else - may be moved to forward it to Bob Dylan to see if he has any idea how this story got started?

* If you enjoyed this blogpost you may also enjoy this interview with Margo Timmins of The Cowboy Junkies.

* If you'd like to receive posts from this blog directly into your Facebook newsfeed, you could *like* its Facebook page and then use the drop-down menu to indicate that it's one of your "interests". This will enhance the possibility that you'll get them. You could also follow me on Twitter @emma1hartley